In March 1892 Alexander Shaw, Richard Plummer and a number of officers from the Black Watch Regiment of the British Army went to the west coast of Clare in search of sand dunes that would be suitable for the development of a golf course. They discovered Lahinch and during a second visit in early April, laid out a links golf course.  The first game of golf was played at Lahinch on Good Friday 15th April 1892 between Lieutenant William McFarlane of the Black Watch Regiment and William F. McDonnell, a Limerick businessman. Feathers and sticks were used to mark out the course.

Earlier that day the first meeting of the Club took place in Sharry’s Hotel on Main St., Lahinch and ever since there has been a wonderful interaction between the village and the golf course.

The original course had nine holes on each side of the Liscannor Road.

In 1894 Alexander Shaw invited Old Tom Morris, the celebrated Scottish golfer, to design a new links golf course.  Old Tom Morris placed great emphasis on the sandhills side of the links. He said Lahinch was “the finest natural course he had ever seen”.

Willie MacNamara was the Golf Professional and Greenkeeper at the Club from 1899 to 1927. The Studdert family from Corofin sent Willie to Westward Ho to learn the art of greenkeeping. Willie lived in Avondale, on Lahinch’s Main St.  A typical newspaper report from that era states: “The Lahinch links is in beautiful condition just now and reflects much credit on the care and diligent attention bestowed on it by Willie MacNamara, the Club Professional and Greenkeeper”.

The Golf Links Hotel, a magnificent building overlooking the village, was a great boost to the growth of golf at Lahinch. It opened its doors on 5th May 1896 and was the brainchild of Alexander W. Shaw. Golfers from all over the world came to stay at the top quality hotel.

The fact that the West Clare Railway came into the village was a further boost to the development of golf tourism at Lahinch. A golfer could leave Euston Station, London at 6 a.m. and arrive in Lahinch for lunch the following day. Sadly the Golf Links Hotel and West Clare Railway did not survive into modern times.

In 1926 the services of world renowned Golf Course Architect Dr. Alister MacKenzie were sought and plans for a new 18 hole course were agreed. In his report to the Committee, Dr. MacKenzie stated that, “Lahinch will make the finest and most popular golf course that I, or I believe anyone else, ever constructed.”   The cost of the development was set at £2,000.

In 1928 John Burke arrived as a golfer and won the South of Ireland Championship for the first time.  He went on to win four-in-a-row and eleven titles in all. He won his first Irish Close Championship at Lahinch in 1930 and also won that title four times-in-a-row. A contemporary newspaper account stated: “Much water will have flown through the river Fergus before Ireland produces a player capable of taking the championship from Sean Burke.” He won his place on the British and Irish Walker Cup team in 1932 which was held at Brookline Country Club in Boston.

Another famous Lahinch golfing personality from the period was Mick O’Loughlin. His sharp wit and turn of phrase brought great enjoyment to many. He won the South of Ireland Championship in 1937 and 1938.

A new Clubhouse was built in the 1940s’.  The 2nd World War also saw a drop in the number of visitors coming to the Club but, once again, the Club survived.  Careful nurturing of the links golf course ensured the enduring attraction of Lahinch to its members and visiting golfers. The 1946 South of Ireland Championship Final between John Burke and Joe Carr was perhaps the most famous “South” final. It ended with Burke winning on the 39th green. It was his eleventh and final “South” success.

This era saw the arrival of Brud Slattery to the administration of the Club. He was Honorary Secretary/Secretary Manager at Lahinch from 1954 to 1984.  He presided over enormous changes at the Club including the construction of the 1st 9 holes on the Castle Course and major renovations on the clubhouse.

There was huge growth in the number of visitors coming to play Lahinch, in particular overseas visitors. 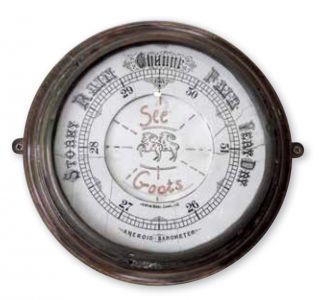 The Club crest embracing the thistle and the goat was approved by the Committee in the early 1950’s. The thistle represented the Scottish element in the founding of the Club and the goat symbolised the weather. The barometer at the Club was not functioning properly and a sign over the barometer simply said; “See Goats”. When the weather was wet and the forecast poor, the goats were usually seen hovering around the clubhouse – in fine weather they made their way out to the far regions of the golf links.

John D. Harris, a renowned golf architect developed the plans for a new Castle Course in 1961. In his report to the Committee he stated; “the 9 hole course was constructed in 1963. After a lull of thirty five years, golf was back on the Corcass”. It was extended to an 18 hole golf links course in 1975.

On the playing front, Lahinch Golf Club achieved some notable victories during this period. The Club won the All-Ireland Barton Shield in 1947 and 1955 and won the Irish Senior Cup in 1959 with Brud Slattery, Secretary/Manager, a key member of the three winning teams. During that period Paddy Leyden won four South of Ireland Championships and represented Ireland on several occasions.  Lahinch Golf Club won the All-Ireland Junior Cup in 1961 and 1963.  Brian O’Brien won six Boys’ Championships in the early 1960’s before turning Professional. John D Smyth won the South of Ireland Championship in 1968 – the last local player to win the “South”.

Dr. Patrick Hillery served as Captain, President and Trustee of the Club.  He served as President of Ireland from 1976 to 1990.

Lahinch hosted the Home International Amateur Championships in September 1987 with the Irish team recording their first Triple Crown success at the event.

In 1992 the Club celebrated the centenary of its foundation with a special Centenary Dinner. Guest of honour was Joe Carr, Captain of the R&A and one of the legendary figures of Irish amateur golf.

The Junior Golf Programme was reorganised in 1995 and the Castle Course has introduced a new generation of Lahinch golfers to the game. The first Junior Golf competition (Harley Cup) took place in 1964 and there is currently a full programme of competitions for boys and girls scheduled throughout the year.

In January 1997 the death took place of one of the Club’s most famous personalities, Brud Slattery. He was an outstanding golfer and administrator. The words of John Betjeman in his poem “The Hon. Sec.” echoed at his funeral Mass: “The flag that hung half mast today seemed animate with being as if it knew for whom it flew and would no more be seeing”.

In the last decade of the 20th century new challenges faced Lahinch Golf Club. With major advances in golf technology and equipment and the unprecedented increase in golf tourism playing the course on a year round basis, Lahinch Golf Club decided to enlist the services of Golf Course Architect, Dr. Martin Hawtree in 1999. Dr. Hawtree’s plan modernised the links golf course at Lahinch providing a top class championship golf course.  In the new layout, the sand dunes closer to the Atlantic Ocean were utilised and, in all, 14 greens were redesigned introducing wonderful undulations making putting a fine art.  The redesigned course has met with wide acclaim and is consistently ranked in the World Top 50 courses.

The vision of Alexander Shaw in 1892 to develop Lahinch into a top class golf links course has inspired people in every generation to work tirelessly for the advancement of the Club.  A love of Lahinch has drawn people from all parts of the world and from all walks of life to ply their skills on the great golf links course.

The Ladies of Lahinch

Ladies were to the forefront of golf at Lahinch since the foundation of the Club. Weekend’s of competitive golf in the 1890’s featured special competitions for the ladies. Miss E. McDonnell was the most skilled lady golfer at the Club in the early years while Miss Walker Leigh was elected as the first Lady Captain of the Club.

Nancy Connole from Parliament St., Ennistymon was Honorary Secretary of the Ladies Section from 1947 to 2007. She was a wonderful administrator and made a marvellous contribution to the promotion of ladies golf at Lahinch.  Two other Ennistymon ladies, Nan Ahern and Eileen Roughan, were great competitors at the Club from the 1940’s through to the 1960’s.

On the playing front, the ladies won the Munster Senior Cup on eight occasions.  Their first success came in 1946 with their most recent victory in 2015. Down through the years, Eithne O’Brien (nee McCarron) was a member of a number of the successful teams, winning in six different decades at the Club.

In 1990, following an invitation from the Men’s Committee, lady golfers became full members of the Club and the Club is now governed by a Council with representation from both the Men’s and Ladies’ Committees.

The Ladies section attracts members from all parts of Ireland and from overseas. The common bond is a love of Lahinch Golf Club and lady members’ return, year after year, to enjoy the wonderful facilities at the Club.