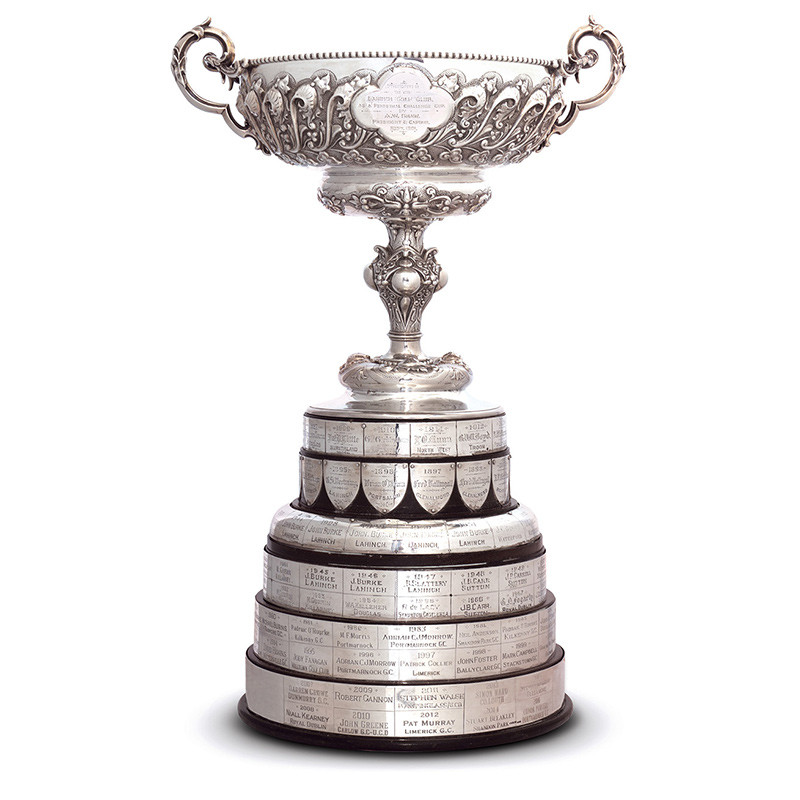 Presented by Alexander W. Shaw 1895
Alexander Shaw was the founder of Lahinch Golf Club and owned Shaw’s Bacon Factory in Limerick. When Fred Ballingall won the Championship for the third time in 1900 he was allowed keep the trophy. Alexander Shaw presented a new trophy in 1901.

Presented by Alexander W Shaw 1896
Alexander Shaw was also one of a group of Limerick business people who built the ‘Golf Links Hotel’ at Lahinch which opened its doors in 1896. 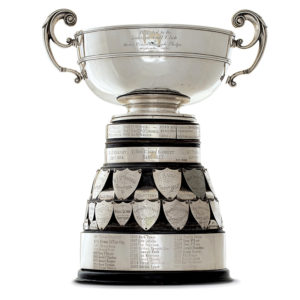 Presented by Joseph and Ernest Phelps 1896
The Phelps brothers were of Anglo Irish stock involved in Limerick business whose family motto was ‘Semper virescit virtus’ – Virtue will always flourish.

Presented by Dr Barratt Smyth 1897
Dr Barratt Smith was a medical doctor with the British Army based in Limerick.

Presented by Sir Archibald Murray
Archibald Murray was a leading figure in the British Army and was Chief of Staff to Sir John French, Lord Lieutenant of Ireland in 1921.

Presented by Golf Links Hotel Company 1898
The Golf Links Hotel (1896-1933) was one of the finest hotels of its era. Visitors to the hotel overlooking the village enjoyed a panoramic view of the golf course and the Atlantic Ocean. 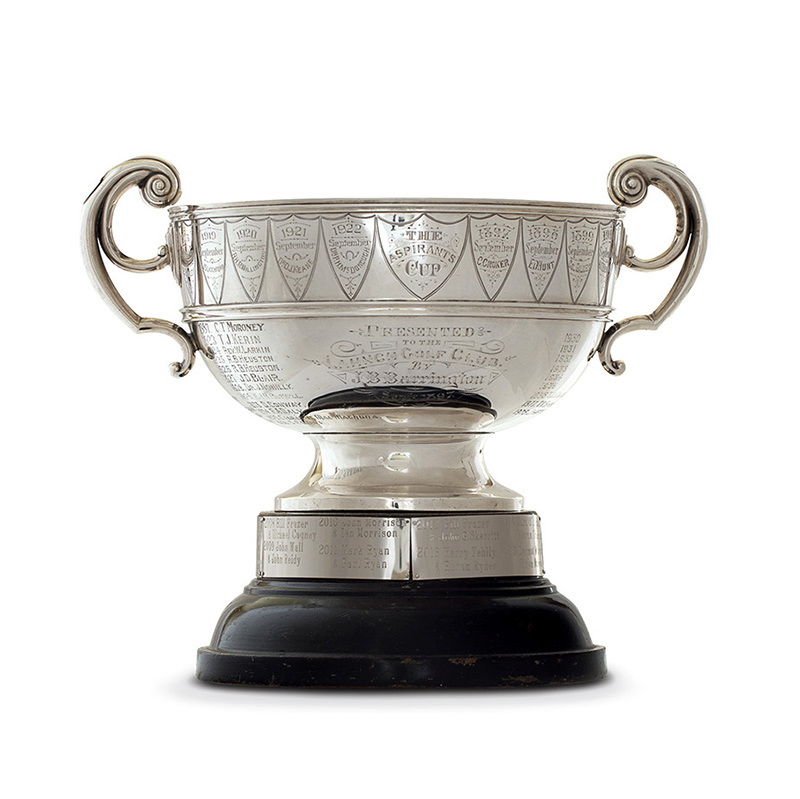 Presented by J. B. Barrington 1900
B. Barrington was a member of a famous Limerick Anglo Irish family. The family founded Barrington’s Hospital in Limerick and lived in Glenstal Abbey.

Presented by Mrs Burns Lindow 1903
The Burns Lindow family lived in Ballynanty, Kilmallock and were part of the South of Ireland Imperial Army Yeomanry.

Presented by Lord and Lady Dunally (Prittie – Tipperary) 1907
The Dunally family represented Tipperary in the United Kingdom Parliament in the 19th century and were also Lord Sheriffs of Tipperary, living in a demesne in Kilboy.

Presented by Miss Pamela Parkinson 1911
Nine holes of the original course were constructed on the Parkinson estate. The Parkinson family enjoyed a close friendship with the Sharry family (owners of the Golfer’s Arms) where Lahinch Golf Club was founded.

Presented by Lady Members 1912
Ladies were prominent at the Club from the beginning. In the early 1900s two Lahinch members, Mrs Durlacher and Miss Florence Walker Leigh, were members of the Irish International team. 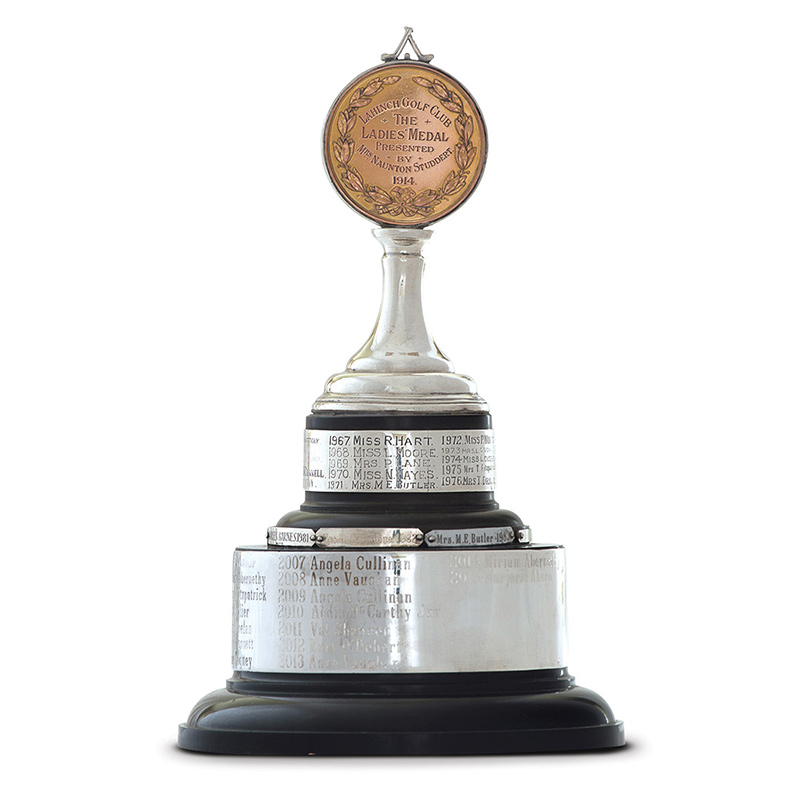 Presented by Mrs Naunton Studdert 1914
The Studderts were a prominent Clare family who owned Bunratty Castle and lived in Corofin.

Presented by S.C. Vansittart 1917
The Vansittart family were originally from Denham, Buckinghamshire and worked for the British Foreign Office. They lived in Coolbawn House, Castleconnell. 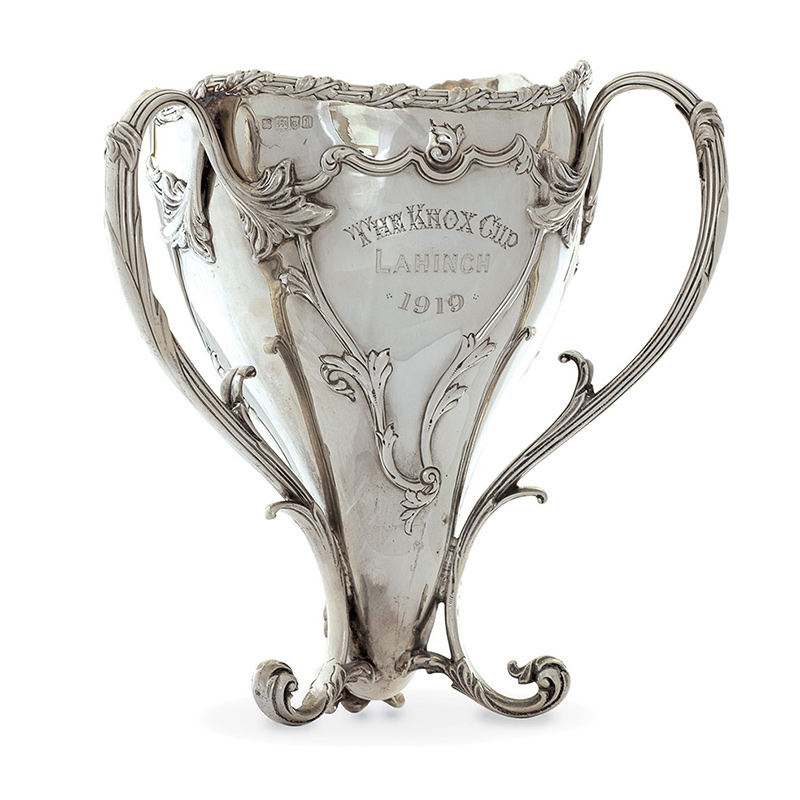 Presented by Mrs Alexander Knox 1919
The Knox family owned one of the biggest shops in Co. Clare and were a respected Presbyterian family. Mrs Knox’s nephew Des Torrens represented Lahinch with distinction and played rugby for Ireland. 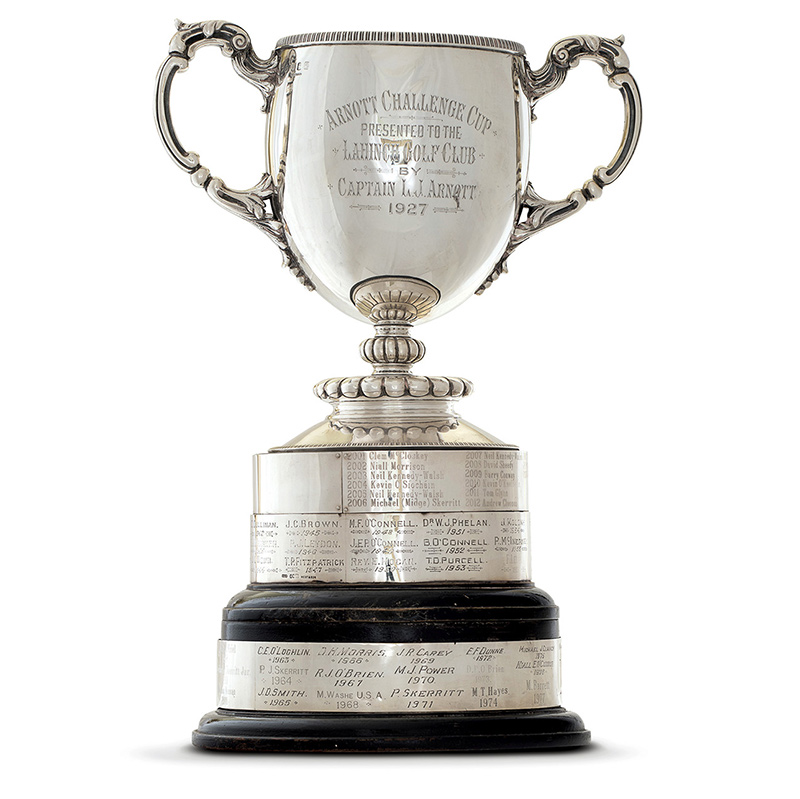 Presented by Capt. L.J. Arnott 1927
Capt. Arnott fought in the First World War and the Arnott family owned a famous store in Dublin. His grandfather was a former Lord Mayor of Cork and a member of the British Parliament.

Presented by the Residents of Lahinch and District 1928
The close association between the village and the Golf Club for one hundred and twenty five years is a feature of the Lahinch golfing experience.

Presented by Dr Browne, Bishop of Galway 1942
On his elevation to the see of Galway in 1941 Bishop Browne was conferred with honorary membership of the Club. He presented this cup to show his appreciation of the honour.

Presented by Gerard Henry William Owens (owner Ennistymon House – Falls Hotel) 1945
The Falls Hotel, the former home of the MacNamara family, leading landowners, is one of the most famous houses in Co. Clare.

Presented by Sir Thomas Harley 1956
Sir Thomas Harley was a Liverpool solicitor who fought in two World Wars and received the Military Cross. He was an influential member of the British Conservative Party and an annual visitor to Ennistymon.

Presented by Mrs W. A. Smithwick 1957
The Smithwick family are brewers of Irish ale in Kilkenny since 1710. The family firm was founded by John Smithwick and the family home was Kilcreene House in Kilkenny.

Presented by Jeremiah Dolan 1958 – Lahinch V. Castletroy (Men)
Jeremiah Dolan was a Limerick businessman whose aim was to promote friendship through golf.

Presented by the members of Lahinch Golf Club 1959
Mick O’Loughlin was the first local to join Lahinch Golf Club. He was a much loved character with a wonderful turn of phrase and was a two time winner of the South of Ireland Championship.

Presented by Lady Harley 1960
Lady Hilda Harley was a member of Cheshire Co. Council and a Justice of the peace. She was Lady Captain at Lahinch in 1960.

Presented by Richard J. Williams 1964
The Williams family owned Tullamore Dew since 1861. The family served the Army in two world Wars. Capt. John Williams received the Military Cross for services in the First War and his son Shaun was killed in action in World War Two.

Presented by Nan O’Mara 1965
Nan O’Mara was a prominent member of the Ladies section of Lahinch Golf Club for over sixty years. She was Lady Captain in 1934.

Presented 1965 by Peter Bunbury – Lahinch V Trinity.
Peter Bunbury was a low handicap golfer from Portmarnock and a regular competitor in the South of Ireland Championship. He was involved in the installation of the first watering system for the greens in the 1960s.

Presented by P.V. O’Neill 1967
Paul O’Neill was for many years Managing Director of O’Neill Sports – founded in 1919. The company motif ‘Lámh dearg abú’ is inscribed on the cup.

Presented by Eithne Roberts (Pentony) 1968
Eithne Pentony was a two time winner of the Irish Ladies Close Championship and an Irish International from 1932 until 1939. She won three Munster Senior Cup medals with Lahinch.

Presented by Thomas G. O’Loughlin 1968
Tommy O’Loughlin was son of the famous ‘Mick’ and a much loved Ennistymon victualler.
The O’Loughlin family association with the Club dates back to Good Friday 1892. 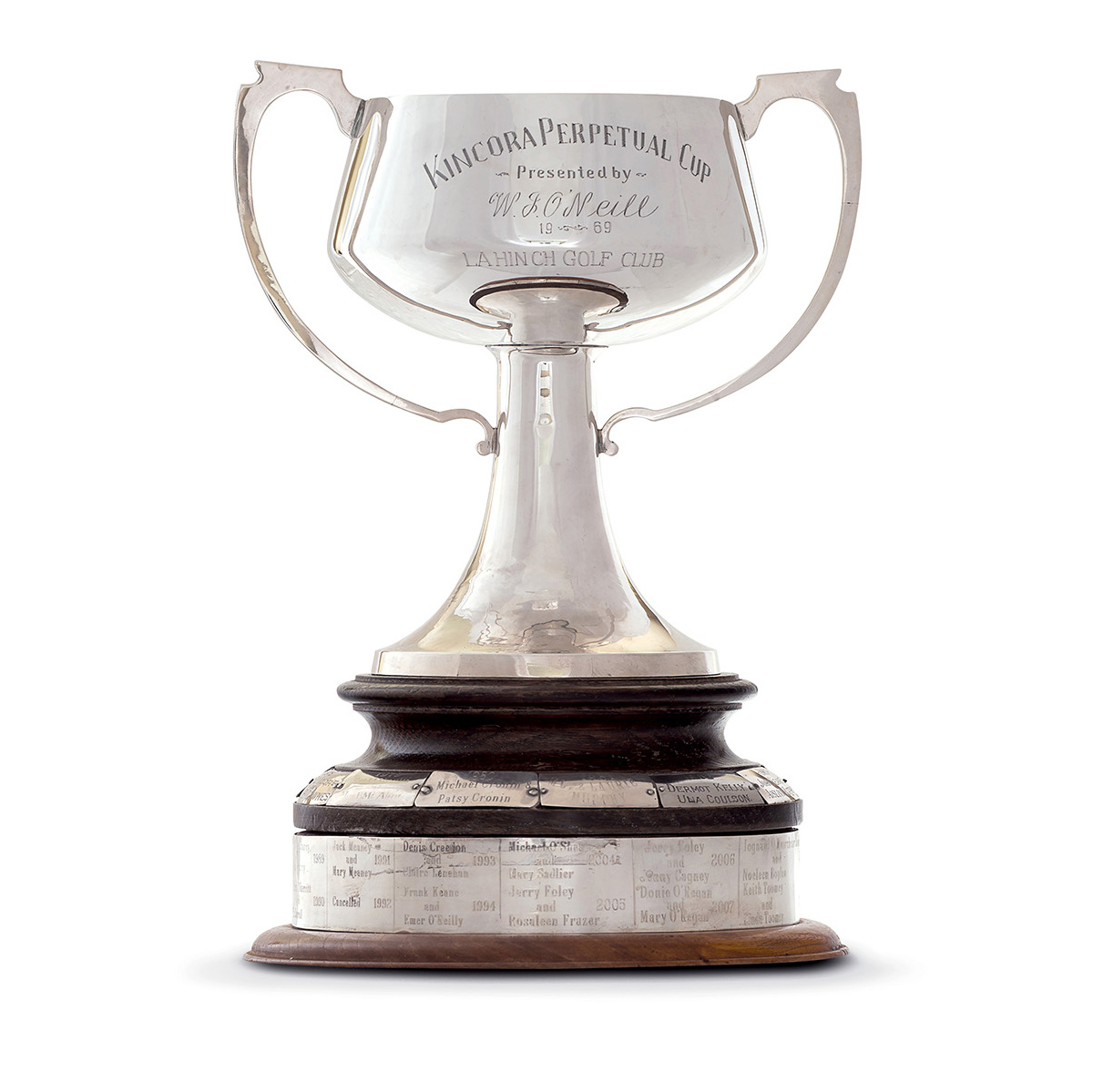 Presented by W.J. O’Neill 1969
Billy O’Neill was a Dublin based accountant who loved to attend the August and September Open meetings at Lahinch. In the dim and distant past, Kincora was the palace of Brian Boru in Killaloe on the banks of the River Shannon.

Presented by Derry Culligan 1969
Derry Culligan served as Captain and President at the Club and for many years played off a handicap of three. In presenting the Lissadell Cup, Derry was anxious to promote junior golf.

Presented by Cormac Hamill 1970
Cormac Hamill was one of many Northern golfers who came to Lahinch every summer and fell in love with the Club. 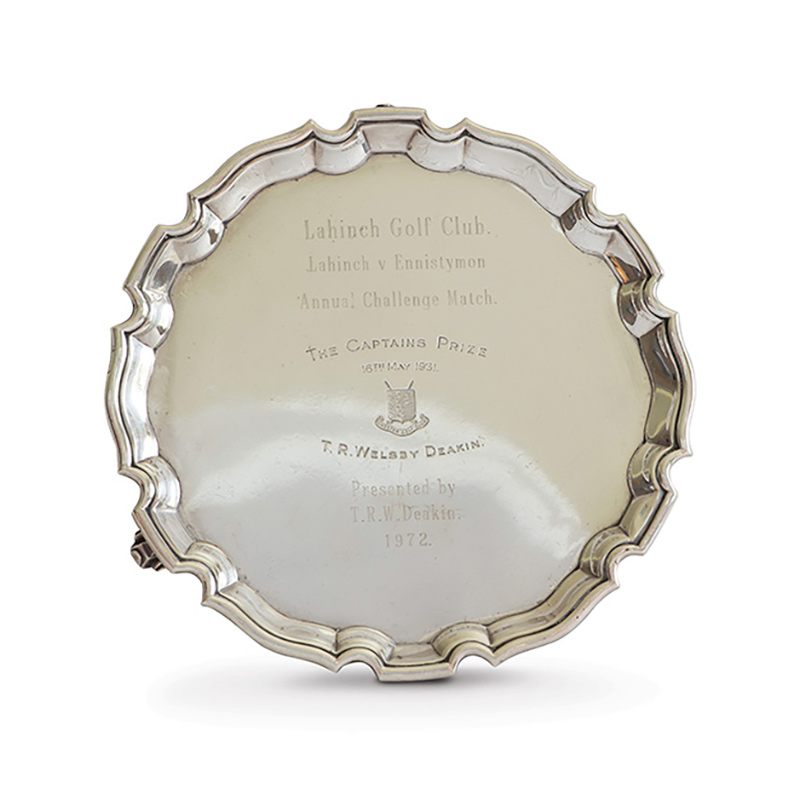 Presented by T.R.W. Deakin 1970
Ronnie Deakin affectionately known as ‘The Major’ was a scratch golfer for many years. He was also a founding member of Castletroy Golf Club.

Presented by Nancy O’Brien 1971
Frank O’Brien was a dentist from Castlebar who made a valuable contribution to the Club. He was Captain in 1959 and President in 1970. His wife Nancy was Lady Captain in 1964.

Presented by Egan’s of Tuam 1972
John Egan & Sons were a Mineral Water Company in Tuam who had the Coca Cola franchise for the West of Ireland.

Presented by Mrs Betty Brice 1974
J K Brice was a low handicap golfer from Tralee who was Captain at Lahinch in 1963. His wife
Betty was an Irish International and she won five Munster Senior Cup medals with Lahinch. 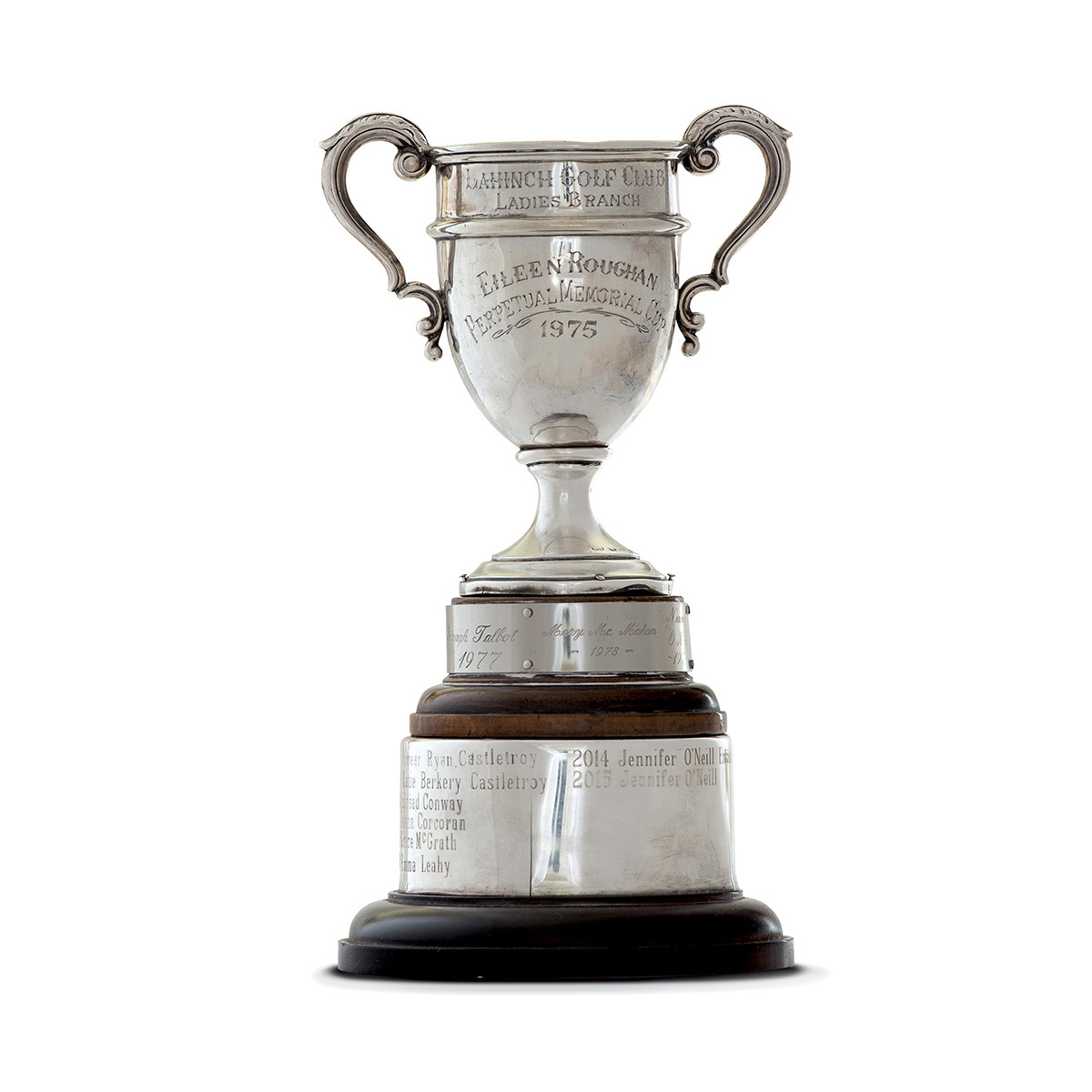 Presented by Lady Members of Lahinch Golf Club 1975
Eileen Roughan was a member of an old Ennistymon family and was one of the first local ladies to join the Club. Her father was responsible for the construction of the lower part of the Promenade at Lahinch in 1911.

Presented by Dr Paddy Bugler 1974
Paddy Bugler was an accomplished golfer and won the South of Ireland in 1954. The Bugler family, with East Clare roots, were a popular Ennis family. Bugler’s Medical Hall gave great service for a long number of years to the people of Clare.

Presented by Allied Irish Banks 1978
Allied Irish Bank in Ennistymon has a long association with Lahinch Golf Club. Many of its staff were influential in the running of the Club over the years.

Presented by Vera Quinlan 1983 – Lahinch V Castletroy (Ladies)
Vera Quinlan and her husband Arthur had a long association with the Club. Vera was Lady Captain in 1985 and Arthur wrote the history of the South of Ireland Championship.

Presented by Lady Members of Lahinch Golf Club 1984
Nora Slattery was an influential member of the Ladies committee for many years. She served as Lady Captain in 1968 and retained a life long affection for her native area – Yeats’s Coole Park and Kilmacduagh of the 7 Churches.

Presented by Mrs Claire Leyden 1984
Paddy Leyden was a four time South of Ireland Champion and played for Ireland throughout the 1950s. He won All Ireland Senior Cup and Barton Shield medals with Lahinch.

Presented by Beryl O’Hanrahan 1986
Beryl O’Hanrahan was Lady Captain at Lahinch in 1982 and Lady President in 1999. The trophy is competed for by Past Captains on the occasion of the Ladies Captain Prize at Lahinch.

Presented by Lahinch Golf Club 1992
Greg Young was one of the most popular golfers ever to grace the fairways of Ireland. He was an Irish International and won All Ireland Senior Cup and Barton Shield medals with Lahinch. He was a member of the Irish International team in 1958.

Presented by Brud Slattery 1992
Brud Slattery made an outstanding contribution to Lahinch Golf Club. He served as Captain, President, Secretary Manager and Trustee. He was an Irish International, South of Ireland
Champion, All Ireland Senior Cup and Barton Shield winner with Lahinch.

Presented by the Carr family 1997
Joe Carr was an outstanding Irish amateur golfer. He won many major championships including the British Amateur Championship on three occasions. He also won three South of Ireland championships at Lahinch.

Presented 1997 by Past Lady Captains
Nancy Connole served as Honorary Secretary of the Ladies Section at Lahinch Golf Club from 1948 until 2006. She also served the Club as Lady Captain in 1961 and Lady President in 1988.

Presented by Tony Garry 1998
John Burke was the outstanding Irish amateur golfer of his generation. He was the first golfer from Southern Ireland to make the British and Irish Walker Cup team, which he did in 1932. He won eleven South of Ireland Championships at Lahinch.

Presented by Seamus Lynch 2003
The Lynch family were prominent business people and hoteliers in the Clare region.

Presented by Pat and Maura Falvey 2004
The Dun Maebh Cup promotes junior girls golf at Lahinch. ‘Dun Maebh’ adjacent to Lahinch National School was the home of Dr Denis O’Dwyer who made a notable contribution to the Club in the 1940s. He was instrumental in the building of a new clubhouse in 1947.

Presented by Maureen Metcalf 2008
Maureen Metcalf was a sister of Nancy Connole. Charles Metcalf, the grandfather of Maureen’s husband Tony, was an influential member of the Club in its formative years and was conferred with Honorary Life membership in 1907.

Presented by Eugene Gilligan 2010
Gerry Gilligan won the South of Ireland Championship in 1951 defeating Tom Egan of Monkstown in the final. Eugene Gilligan served as Club Captain in 2010.

Presented by the McCarthy family 2012
Larry McCarthy was an Irish international golfer from 1953 to 1956. His family have a long association with the Club and his daughter Aedín served as Lady Captain in 2013. 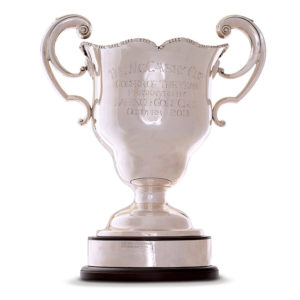 Presented by Lahinch Golf Club 2013
The McCavery Cup honours the outstanding contribution made by the McCavery family to the Club. Bill McCavery was Professional at the Club from 1927 to 1987. His son Robert was Professional from 1959 to 2013. The 3rdgeneration Robert Junior, is a key member of the team at Lahinch.

Presented by Oswald Browne (Junior) 2015
Oswald Browne was Captain of Lahinch Golf Club in 1927 and was a regular competitor in the South of Ireland Championship. The trophy is significant as it dates back to 1929 when Oswald Browne won the trophy donated by Redmond Simcox for his Captain’s Prize.

Presented by Finola Garrahy 2015
Francis Garrahy was a much loved figure at Lahinch. He served as Captain in 1982, President in 1996 and Club Trustee up to his death in 2014.